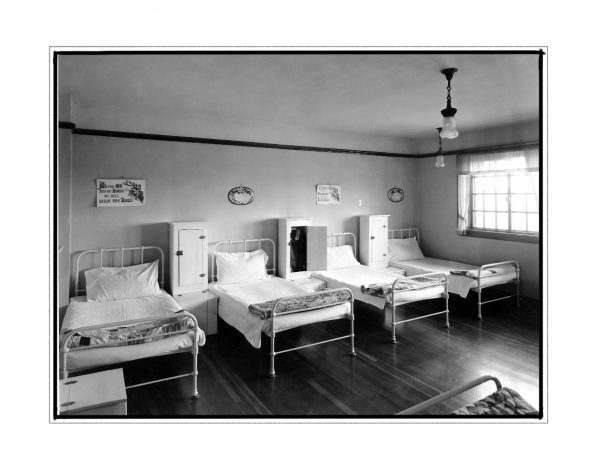 Readers, especially gentle readers, may find themselves shocked, even appalled by some descriptions, or by the adverse experiences others describe in “Shadows – see the chapter “Other Voices.” Childcare was quite different in 1945. What is now considered abuse, at least the milder kinds, was often regarded as something children needed or deserved. Some of it, like strapping, even sanctioned. All of this was routine at the home, though there was some criminal abuse, hidden and selective, especially in the time after I left [2].

Moral instruction played a large part in the home (even if it had little impact). We regularly ignored wall plaques offering instructive Christian homilies. After all, what could a small boy make of, “I am the way, the truth and the light?” We could not though escape memorizing a biblical psalm every week (remnants which, bizarrely pop into my head on occasion, to this day). These things though mostly vanished during my years at the home. One stinging aspect lingered, corporal punishment being a societal norm. A sharp rap on the earlobe, with a wooden spoon, considered the most useful way to gain attention.

One of the more shocking, and harmful, practices was mingling mentally challenged children with the others. This too was typical, often justified by the well-meaning notion of keeping the family together. For those interested, a thorough and illuminating background can be found at: < https://cyc-net.org/reference/refs-history-canada.html> “An Historical Perspective on Residential Services for Troubled and Troubling Youth in Canada”  by Grant Charles and Peter Gabor.”

One final aspect needs mention and that is housing. We lived in dormitories, barracks like, with something like thirty or so beds in impossibly neat rows.  If one had imagination, and some of us had extraordinary ones (possibly a benefit of deprivation) the dorm was an island, in respects like that memorably described in “Lord of the Flies.”  Anyone familiar with English boarding schools will relate.  I may be wrong, but we had the added twist of having lots of close room mates. Alas, a few of them psychopathic. On that riveting note, a final historical tidbit seems justified.

In 1947, an investigative team from the Royal Commission into Child Welfare in Alberta visited the Wood’s Christian Home as one of three institutions they examined. In the final report, they lauded the family atmosphere at the W.C.H., describing apparently happy children, compared with the ‘zombie-like’ children at the other two orphan homes. The commission head, the distinguished Charlotte Whitton did though scathingly condemn the barracks- like boy’s dorm at the home. She was perceptive in that, although it took more than ten years before cottages began to replace the barracks model.

For all of the small horrors, many of my childhood memories, for the literary minded, have parallels with Dylan’s  (Thomas, the Welsh poet) “Fern Hill” and “A Child’s Christmas in Wales.” Both lyrical descriptions of the joys of childhood and the treasure of innocence. Not wishing to diminish some of the truly awful things that happened, the home I knew was mostly a happy place.

READY?  To begin with the first segment of my Memoir, “little Boy’s End” click on the slide-out menu on right side of this page (<about half-way down the page).

[2] WARNING: If you might find abuse triggering or are otherwise gentle of nature, readers are advised to skip the following passage.  I have credible, and substantial, testimony as to gross abuse at the home during the early sixties, that is after I left.  I am speaking about rape and cruel beatings. The horrific acts caused life-long consequence for at least two men.  Those two,  fourteen year-olds were wards of the province. One of the abusers, an employee at the home, went to prison -for one year, while the other, a volunteer, escaped detection.  Sparing the details, I will only relate that one of the fifteen year-olds was beaten and sodomized by a boy’s supervisor, on the same day he returned from hospital wearing a cast on the arm he had broken in a play ground accident. The boy was a ward of the province.