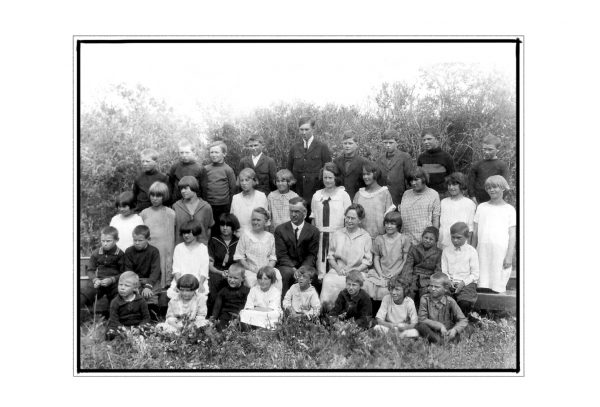 From the Swift Current (Saskatchewan) Sun, June 5, 1914, quote, “Mrs. Wood, the wife of the Baptist minister at Aneroid lost her life on Monday last, when their house was burned. The house took fire in the middle of the afternoon and Mrs. Wood was caught in the blaze. She ran into the open air, the wind fanning the flames which enveloped her. James Benson, who helped carry her to the hospital told the Sun of the great agony that she suffered until death relieved her at nine in the evening. The cause of the fire is unknown.”

We know from this report, and from the death registration, that Elizabeth Wood died on June 1st of 1914, Later accounts of the tragedy describe her filling an oil lamp, using gasoline in error, which caused an explosion. That account is not confirmed by news accounts of the time. There was just one thankful outcome. A neighbour rescued Wood’s five-year-old daughter, Annie.

Reverend George, with little Annie, went to be with his brother then living in Alberta. He also must have found some solace with his sister Janet who was then living in Calgary. Janet was a Deaconess at Knox Presbyterian. She might have helped George out of his deep grief by playing some role in creating a mission assignment for her brother – to travel to Innisfail. Alberta and to establish an orphanage for children.

What we know for certain, from archived letters, is that presumably in the late summer of 1915, she traveled by train from Calgary to Innisfail. On that train, she met a lady who was having surgery, and who had not idea of what to do with her infant girl. Janet offered to take the child until the  mother recovered. Also with Janet was the first employee, whom she had hired for the new home.

Janet met George at the Innisfail station and presented him with the first ward, first worker and a gift of a ten dollar donation. The orphan home was underway. There was one more remarkable event that happened before the orphan home opened its doors on January 1, 1916. While strolling the streets of Innisfail, George happened on a distraught soldier, Thomas Porter, who had lost his wife, was about to ship out overseas and had no idea of what to do with his children, five-year-old Willie and two-year old Mary. He poured out his troubles. George listened, and then offered to take the two. Thus, the first two longer-term wards came into care at the founding orphan home.

The rest of this remarkable story, the history of such, is laid out in two timelines which can be accessed by clicking on the links just below. It is an epic story with tragedy, triumph and conflicts aplenty. The legacy of service to young people continues to this day in the great work done by the successor organization, the Wood’s Homes in Calgary, a branch of which today is still situated at the Bowness site of the story that unfolds in these pages.

About Bowness and the Wood’s Christian Home. In 1936, the Wood’s family made a momentous move to Bowness after Reverend Wood purchased the historic Hextall Mansion House. (Hextall was an English pioneer land developer who played a key part in the early development of Bowness.) Prior to the family arrival, the still grand house had briefly been a tuberculous sanatorium under the auspices of the Seventh Day Adventists. (See link to the Bowness Historical Society website on the Other Resources page.)

The Bowness we knew centered on adjacent Bowness Park and a little further on (and so tempting to us) Harrison’s store. Bowness park was back then a magnificent place, more so because it was off-limits (something we often ignored). There was a lagoon, dance pavilion and a carousel with dancing horses. I can still recall, on Sunday afternoons the long lines of cars at the entrance: sports with their girlfriends, excited families and aspiring canoeists. On summer evening the melodious sound of the orthophonic machine (early outdoor sound system) wafted our way. Canoeists, often girls being courted by suitors), drifted, haphazardly by on the canal alongside the home.

We had a scout troop, so on occasion we would march down Bowness road to the nearby scout hall. Nearest the home was the terminus of the street car (trolley) line – later to be a bus loop.(sometimes boys road all the way to Montgomery in winter, gripping the back bumper and sliding on the icy road. We only occasionally went in to visit Calgary across the Shouldice bridge, passing by the focus of out Saturday afternoon dreams, the Rex theatre.

Link to a timeline of events in the history of the Wood’s Christian Home click Here.  W.C.H.-Timeline-of-History-Events (12) docx

Link to a timeline of staff and other people click Here W.C.H. Historical Timeline of Staff and Others.

NOTE: To historians. As part of a personal project to explore the history of the Wood’s Christian Home  J. Richard Nickel and this writer collaborated for two years on research as our contribution to the 100th anniversary of the home. Dick did the lions share, and it is he who located, remarkably, the living descendants – in England – of the first children in care.  We were much encouraged and supported by our good friend Perry Davis. There is a mass of documents and other information that could be shared with any historian or graduate student wanting to create something more professional. The history, much of it documented, covers the entire evolution of institutional childcare, from the origins of the home at Innisfail (and the founding Scottish social work influences) through to the present day – some two hundred years of progress and change.

Acknowledgments: For their support and vital archival work we thank the Glenbow Museum Archives,  the Mountainview Museum and Archives, at Olds, Alberta and also the Bowness Historical Society. See also photo credits in About This Site. All images on this site are protected by copyright. Reproduced here courtesy of and with permission from the Glenbow Archives.